Skip to content Skip to sidebar Skip to footer

Sometimes in life, we need a little curiosity and passion of an explorer.

Imagine walking into a forest of concrete, and the city turns into humans, what kind of clothes would Hong Kong wear? This crazy thought became an inspiration, local artist Wilson decided to fuse it into a Chinese fine brush painting.

The little paper puppets all had the same pose and were collaged with various elegant clothes. They are uniquely interesting, reminding us of the paper puppets we had in our childhood. This is the widely-applauded fitting room series, while the architecture series also attracted many.

This time, the paper puppets were transformed into a giant wall panel from canvases and painting paper, and exhibited at JPS gallery in Landmark — Wilson’s solo exhibition “Wilson Shieh Chop Suey 2008-2022”.

Before “Chop Suey” entered the art gallery, there was a wall of art behind the huge glass — a monochrome background of Hong Kong University in 1941, and a magnified Eileen Cheung paper puppet in three dimensions. It was quirky and eye-catching, placing viewers inside the painting waiting to be explored.

Known for his fine brushwork, Wilson is an expert in depicting meticulously with a brush, and integrating contemporary events to show and record the stories of Hong Kong in his eyes. Most of his well-known works involve Hong Kong pop culture and famous people. He uses his childhood stories to resonate with the public. On the bottom of the glass door, there is a cardboard logo of himself, and the opened corner reveals vague silhouettes of hands and feet, alluding to Wilson’s signature paper puppets.

Looking back, Wilson had countless creations in the past 14 years, and this is his 10th solo exhibition.

“I’ve had lots of creations, but sometimes when I see a certain artwork, I’d ask myself: Did I draw this? So when I was preparing this exhibition and even when it launched, I kept recalling my memories.” Wilson said with a smile.

Although his works are numerous, Wilson thought that 2008 to 2022 were key in his career — after moving into a studio in Fo Tan, he was starting to explore.

And naming it “Chop Suey” was fate, “Some works of the same series were sold out long ago, and only a few were left; there were also some experimental works, which accounted for a few of them and cannot be grouped. These works have been waiting for an opportunity to show themselves to the world. Putting all these works together is like mixing all the dishes and turning them into a new one.”

The twenty-five artworks in the gallery have been classified into four series, other than the exquisite “Fitting Room”, there are “Four Seasons” which was the original concept of “Fitting Room”, and “Assorted Cassettes” which belonged to Wilson’s childhood music playlist. What’s more  fascinating is the never-seen-before “Golden Quotes” series and the all-new “An Autumn’s Tale” starring Chow Yun Fat. A round table covered in white cloth, and restaurant chairs are placed in the gallery to relive these unforgettable scenes in the movie.

“‘Golden Quotes’ and ‘Kind Boy or Devout Girl’ and others are the ‘Chop Suey’ of my ‘Chop Sueys’. They are ideas that have been in my collection for a long time, never seen before.”

These few experimental works also revealed his eccentricity and eclecticism. “Many artists have a certain style, an element or a symbol. But I’m scared of boredom, so whenever I’m working on A, I can’t help but think of B, C, D and more. And when I put my mind to finishing an artwork, I’ll jump out of it and try different things, that’s why I have lots of unclassified artworks.

After 10 years, looking back and repainting these artworks also touched him. “Although most of the works in this exhibition are old, looking back, I felt that there is still room to extend and develop.”

During the chat, Wilson couldn’t help but sigh. “I was too impatient in the past, quickly finishing one artwork before jumping to the next. I didn’t have time to sort them out and went straight to the next. But this exhibition is unlike any before, I’m not showcasing the latest artworks or series, but my results over the past 14 years. I also want to find out if the classic or never-seen-before artworks still have value.”

Although “Chop Suey” might not be worth much, it creates a different kind of charm when put together, transforming the exhibition like a new album with a curated selection of songs. “What surprises me is that many people are still touched, interested and willing to learn more about the artworks that were popular in the past. It really shows that they stood the test of time.”

Maybe what was popular may not last, but he still hopes that his artworks were once loved, and had touched many lives.

Whether it’s a curated selection of old works or never-seen-before new works, they are all fragments of memories that are special to him, these works are a tribute to his memories.

“Chop Suey” may be fragmented, but it’s nevertheless a delicious dish, “Chop Suey” will still be loved by many. We hope that before you guys come and try it out, take a second and savour the fine brush painting and charm of Wilson. 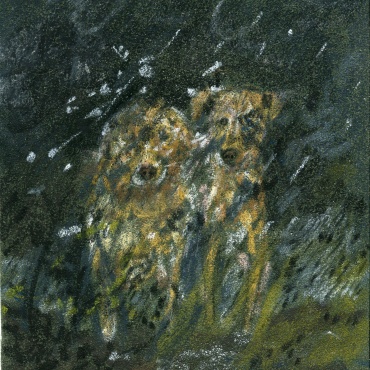